Posted on November 26, 2014 by Salamander Seekers

Wetland 45 in the winter

Penny and Michelle did the final sampling event for the year on Saturday. It was drizzly, but we managed to miss the rain. There were freezes earlier in the week, so the water was cold! Surprisingly, the pond level was the lowest we’ve seen it, and was less than 3 feet deep in the middle. There was a thick mat of grass around the edges of the pond. The first thing we found was cricket frogs - lots of them. The colors varied from dark brown and light brown, to greenish with a tan Y. 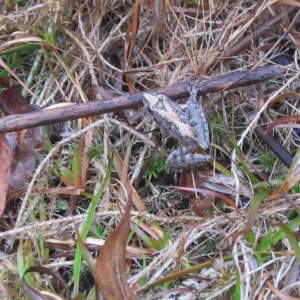 We netted most of the exposed part of the water, as the grassy mat made it too hard to net. Most of the vegetation was dead, including slimy lily pads. We managed to spot one large adult mole salamander. From the net we also gathered dragonfly larvae, and a couple spiders. No other amphibians were seen. The cold water and weather may have impacted the number of amphibians inhabiting the pond.

We really enjoyed sampling the pond, and learned quite a bit about the local amphibian population, and their seasonal changes. Wetland 45 doesn’t have much variety, but it appears to be a typical example of local wetlands.

This entry was posted in Adopt an Ephemeral Wetland, Amphibians. Bookmark the permalink.